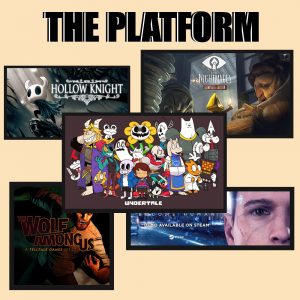 This project appeared on the Nodes in a Nest podcast. Listen to Episode 1 – Storytelling in Games with Eyad Tawfik.

The Platform is a story driven game where the player is in control of the story outline depending on the choices they create. The game is driven by characters and how they react to the environment they are currently in. I want the gameplay to be extremely compatible with the story i.e the gameplay is not a separate entity from the story but rather a continuation of it. This game’s implicit theme’s focus on the idea and hypocrisy of freedom while its explicit theme is the main character’s relation and connection to other characters.

This game is heavily inspired by games such as Undertale, Little Nightmares, and Bastion.